I am really tortured by o2 DSL. I filed an application on 30-September 2017 for DSL internet. They gave me an appointment of 23-10-2017 for technician to activate and install.

On 23rd Technician came and did some connectivity and left by saying that now you can connect the router sent by our company (o2 Home box 64441).

Later in the day, I connected the router (as described in booklet).

All lights on router (Power, LAN, DSL) were green but Info light was red. I connected router to my PC and opened router page (o2.box  or 192.168.1.1), After doing automatic steps in router web page, Router asked for Zungag-PIN (10 digit code, provided in contract for internet+ phone activation).

In my contract letter, underneath my phone number, there was VOIP-PIN (10 digit code) for internet activation. I inserted it in router page (Zungag-PIN). But router is not accepting it. It says it as wrong pin. From that day to today, I got stuck.   (Picture attached)

I tried live chat (o2), they denied for DSL matters, three times I called to their hotline, they could not help me, Just they repeated the same 10 digit code to insert in router and it should work. I wasted a lot of time for calls (30-40min per call).

Finally I called through my German colleague to hotline, Really they were very soft and friendly with her. This is very unfortunate. The service center guy tried to help and repeated the same 10 digit number for activation. He said I am resetting all the data, now probably it will work. But it is not working...................... Very unfortunate ..... very torturing...  I sent many emails to o2 and telefonica on their different email address but no reply.

Then I decided to terminate (kundigung) my contract. But o2 DSL department said you are welcome to terminate in 2019 (after 2 years). Your initial 14 days are counted from the day of application not from day of activation.

Either they sent me wrong router or wrong activation PIN.  (Picture attached)

whether it is a misunderstanding. In this case they may give you a contract without the Aktivierungsgebühr or a refund somehow.

Benutzerebene 1
Generally it is not a good idea to post personal data in a public forum. As your PIN should only work from your home it hopefully should not be a Problem in this case.

When inserting the PIN, take enough time and check exactly for typos (you wrote Home Box 64441).

If you really got a wrong PIN, only the Hotline can provide a new one.

To make sure your PIN really doesn´t work, do two Things:

1. Power reset: Remove the home box from electricity for some minutes. Put it back on electricity. Give enough time until nothing changes any more.
2. Reset to factory Settings: On the back of the router just next to the on/off-Switch there is a Little hole. The reset push-button is inside. Press it with a ballpoint pen or something similar for ten seconds.

Then connect to your PC and start inserting your data completely new from the beginning.

If this doesn´t work either (you may even try twice or three times the whole procedure), then you Need to call Hotline and make clear to them that your PIN is not working. Best would be to ask a German native Speaker friend to do so.

Thank you very much for your guidance and help.

I already did all these steps repeatedly with different options as described above. I have bit expertise in computer networking / wireless routing. I am pretty sure PIN is not correct. Today my German native friend called on hotline and I think they understood the depth of problem. So they set an appointment for technician to revisit.

I hope the problem will be solved soon.

I am really very sorry to express my grief in a public platform again after ---- days. It is unfortunate to say o2 (DSL department) has failed to solve my problem till today (16-Nov-2017).

In connection with my above story, Technician visited second time to my apartment on 06-11-2017.  He just checked the line. Even on request he did not touch router by saying that my job to check the line, which is ok.

Although I have repeated told (on hotline), DSL , WLAN, Power lights (LED) are green only the info light is Red. Which is understood that line is ok but problem is on router installation and activation on internet / telephone. If the technician does not have to touch the router then it does not make sense to send the technician again.

Problem:  As I have already described, the activation pin (10 digit code) provided to me in my contract is wrong. Router is not accepting that pin (ZUNGAG PIN).

I have repeatedly taken all the possible steps which are normally practiced in wireless networking. (Resetting of router, connecting via LAN cable, wirelessly, running CD etc).

I am pretty sure that access (ZUNGAG) pin, which they have generated for me is wrong or may be router model for which the key is generated is wrong. Whatever, but these people are still unable to solve this issue.

Till today I have contacted them many times on their hotlines through German native speaker colleague. Each call takes more than 40 minutes. Upto one week these people made excuses that we are waiting for to get an update from the technician and once we received we will call back to you. Which never happened.

Lastly, we called them on Tuesday morning and they assured that we are writing in the system that we will call you back in the evening (the same day – Tuesday). Three days passed and call back has not happened.

Now finally I decided to file a complaint against them in the court next week and get rid of such kind untrustworthy company.

This company (o2 DSL) has wasted my time, stressed me mentally and failed to provide me services.

Benutzerebene 1
Hello Ihsan, thank you for keeping to objective speech after such a long list of mishaps. I am not sure about the legal situation. It should not be a problem to get a refund of the money you paid for the time when service was not provided, but I´m afraid you won´t get any compensation for the time and nerves you have lost. When you call the disruption-hotline 0800 52 51 378 now, is there anything told in the automatic sentences in the beginning regarding your account? Rudi

it is said there are three possibilities of a constant red info light. The third possibility is that the 5 possible attempts for authentication have already been used. Until now I could not find out if a factory reset of the router gives you another 5 possible attempts. Are there any more specific informations when you open the router page on your PC?

Thank you very much for instant replies.

After all I need internet, other than that I don’t have any problem with o2. I am o2 mobile phone customer nearly about 4 years which is fine with me all the times.

When it comes to DSL, I have worst experience till now. Personally I am not interested in filing an application in court. Only the thing is if they can not solve issue then why not to do immediate termination of contract, so that I can go for another company. I just need either service (which they could not) or termination.

On hotline there is no special message regarding my contract.

Yes you are right, this I have already noticed for which I have already asked for the use of all possible 5 attempts (which are used up), probably I need a new key (PIN). But the customer officer said I am refreshing and resetting all the account settings and you have to try same access PIN again, which I did and it won’t work. (it is more or less 2 weeks ago, I have already mentioned in my 1st message).

When I login to the page nothing special message appears on the router page, Just it keeps on asking to enter the Zungag PIN, which I do and it is wrong. (I have attached Picture).

Remember from the very 1st day, very 1st attempt I am using the same access pin provided in my contract.

Today I received a call from o2 (+49 8978 79 400) at 9:40, a lady asked to wait for some time, and still we don’t have any proper information from our technician. It is a surprise for me, what is going on; Technician revisited me on 06-Nov-2016 and today is 17-Nov-2017. Honestly speaking lady was very rude and arrogant with my native German speaking colleague. She also talked about my immediate termination of contract by saying that we cannot terminate it because still we don’t have technician data. She said although in special circumstances you can cancel the contract within three months, but now you cannot unless we get technician data.

I don’t know why these people cannot understand, that I made my contract with o2 for internet service but not for contract termination (Kundigung), But If they cannot provide service then off-course it makes sense the cancel the contract. If you cannot provide you service  then it is not my fault, please don’t stick to my shoulders.

After few minutes of call, I receive an email from Telefonica with some strange in my contract copy, they put an additional charges (49.99 Euro) for DSL activation. What is that? It is not my fault.

This is cheating with the customer. They provided me wrong pin or whatever. It is not my fault. Now they want to charge me for that service. I cannot understand.

sorry I forgot to attach image in above message. 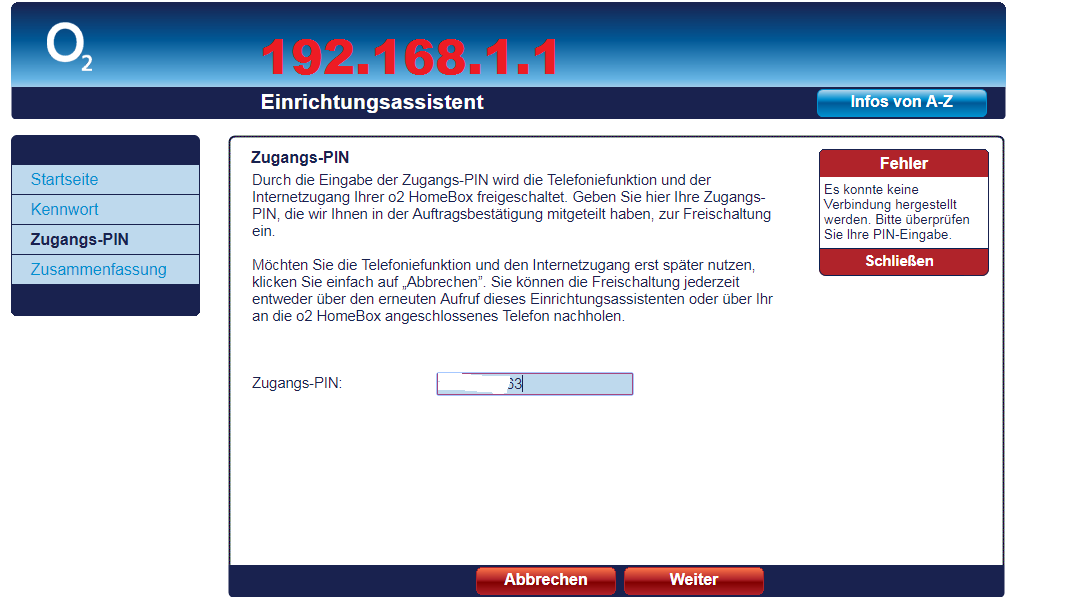 I found this actual advertisement for a contract O2 DSL XL:
https://www.o2online.de/e-shop/dsl-festnetz/o2-dsl-xs?zielgruppe=privatkunden&intcmp=epo2p_promo-short-teaser_dsl-festnetz-bss-o2-dsl-xs

It says that usually apart from the monthly fee, there is to pay
a) einmalige Grundgebühr (activation fee) 49,99 €
b) Router Bereitstellungsgebühr (router renting fee, to be payed once only) 49,99 €

In order to be on the safe side with the legal Situation, you can send O2 a written letter or fax demanding to fix the technical Problems within two weeks time, otherwise you may insist on immediate Termination of contract.

I expect gathering proper Information from the technician (maybe from a subcontractor) may still Need the whole Monday, so the best time to ring Hotline again will be Tuesday morning I suppose.

thank you very much for your guidance and support.

Good news is my internet connection is activated from Friday.

As I mentioned above, they sent me a copy new contract in which date of issue and fee is modified but the rest of things are the same. Access pin is the same.

After wards, afternoon I tried the same key again, It worked in seconds.  It shows that they activated the key and sent me the modified contract and welcome email.

In my original contract there is no activation fee, probably It was promotion when I applied. This is how companies scam their customers and make money.

I could not understand, they wanted to charge this fee, thats why my access pin was not activated.

whether it is a misunderstanding. In this case they may give you a contract without the Aktivierungsgebühr or a refund somehow.

Enter your username or e-mail address. We'll send you an e-mail with instructions to reset your password.